Just a warning, this post is fairly pic intensive!

Yet another great day for chasing!  This day started off with me knowing I needed to end my night either at home in Fargo, or out somewhere in Otter Tail County for a family reunion.  Well, I made it to the family reunion, but I was just a tad late.

After leaving Fargo and heading south as fast as I could, I realized we were very capped off in SE ND.  I consulted with the Ministers of Ministers and ended up in NE SD.  We could see the towers going up, and we were starting to get some returns on the ABR (Aberdeen radar).  I had to make a decision - how do I want to attack this developing storm near Britton, SD?  I attack it from one way, there's a good chance I end up in tennis ball size hail.  I attack it the wrong way, and I end up seeing nothing.  So, I decide to attack it head on.

After driving west out of Lake City I ended up just a few miles east of Britton, and boy was I in for a treat.


I took over 50 photos of just this wall cloud and feature.  Here's a few more shots: 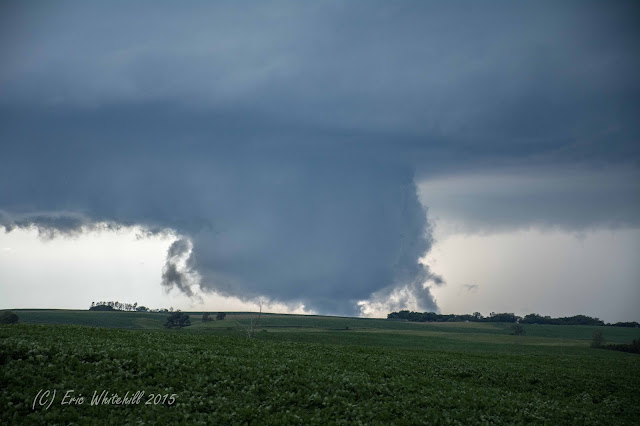 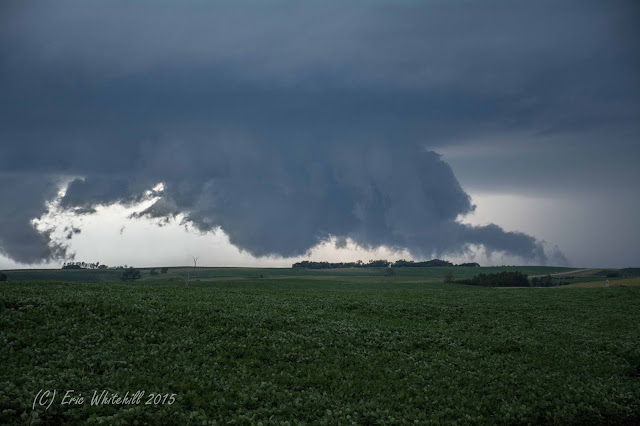 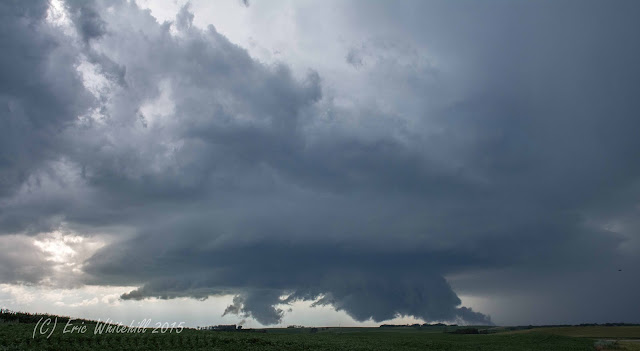 Shortly after this, the storm started to really get the inflow going.  I could feel the warm air at my back rushing towards the storm.  That was when things got...interesting!

The wall cloud was just scraping the stuff up off the ground.  You could just see the precip almost get sucked right up off the ground and get pulled in.  It was rapidly spinning at this point and would not shock me to find some damage from it. 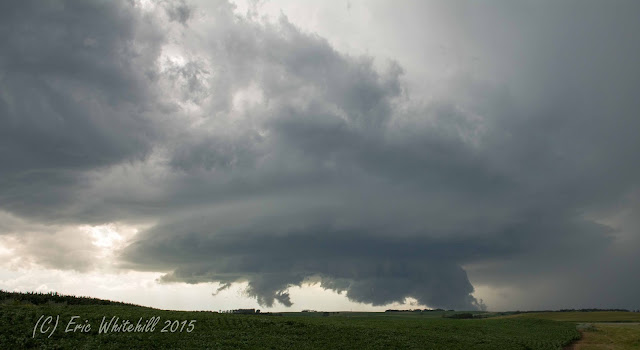 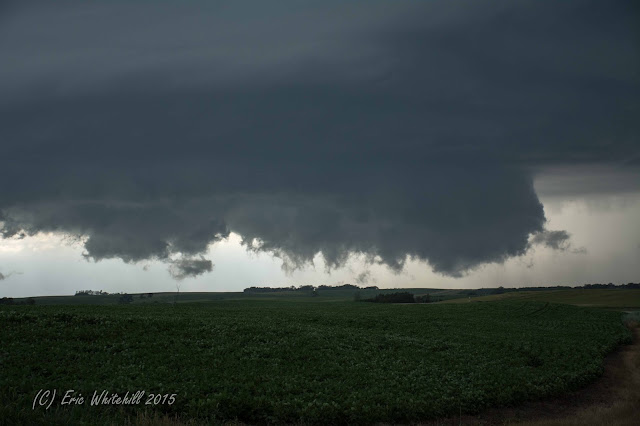 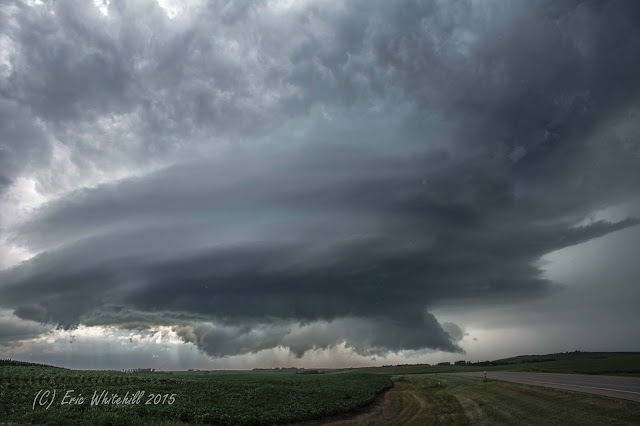 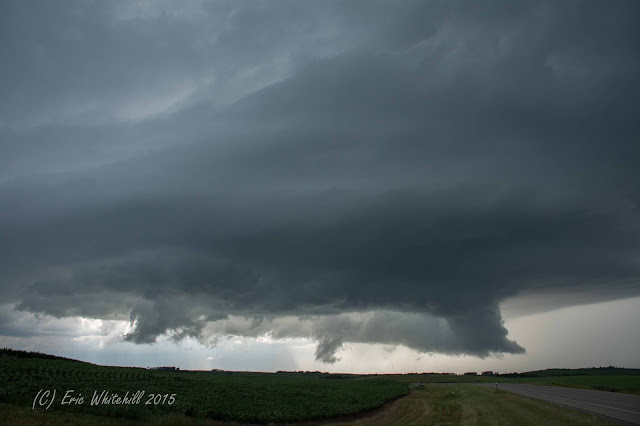 I just could not stop taking photos of it.  At some point though, I knew I would have to leave as this wall cloud was starting to dissipate and a new one was starting to form and take it's place.  This is where the new action area and possible tornado would form.  I also knew from spotter reports there was some very large hail being reported with this storm, which I wanted none of as I like my windshield intact.

At this point I moved to the east, making sure I was staying ahead of the hail core or trying to stay in the inflow notch, as the chance for hail and being in the right position to see something spinny would be the best. Being able to do things like this only comes from experience and training, so please, don't try this at home.

Soon, the new wall cloud started to form and it got it's act together quickly and the storm stayed tornado warned.  I knew I'd need to get east, as the large hail reports continued. 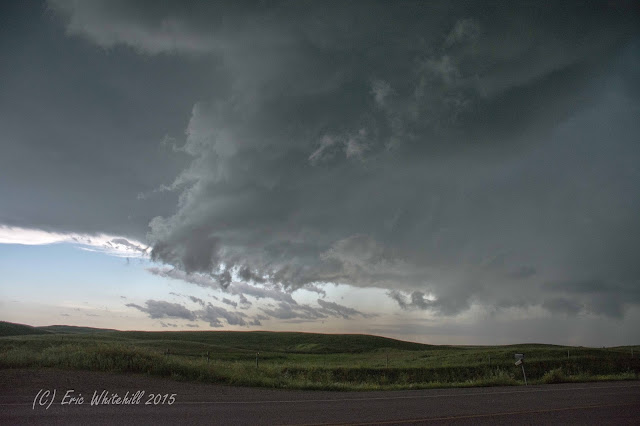 I see the tour groups from COD around, so it was pretty near to know I'm probably in some tour groups photos.  That, and it's always fun to run into.  COD really does a great job educating and taking people on safe tours.

I run into a few other chasers along the way, which was always fun.  I wasn't able to really stop and say hi and gab, as I was very busy getting live footage up to the networks and doing phone cut ins.  So, if I seemed short to some of you out there, I apologize as I was just a _tad_ busy.

Yikes is a good way to put it.  You could almost feel the hail coming down, instead of the roar.  Every once in a while a golf ball or greater sized stone would come flying out and I'd be greeted with a familiar 'TONK!" on my roof or I'd see it explode on the ground around me.  I knew it was time to get east.  As I made my way east, I also ran into THE Doug Kiesling.  Something about a fireworks and a dirt road comes to mind.  (Inside joke.)  This cell was also Tornado warned (radar indicated) and it would be making a beeline for Sisseton.  I needed to get east...and fast!

I made it into Sisseton and parked myself down a little road where I knew I could get out.  I needed to also plan my roads smartly and quickly as I knew very large hail was coming for Sisseton, and I needed to deal with the road network and the ultimate decision - do I go south on I-29, or do I continue to jog east and hope the hail core stays far enough north of 10 to where I don't turn into a gigantic while golf ball.

I headed south, took one quick look back, and I could see something trying to make it's way out of the clouds and wall cloud area.  I never saw anything touch the ground though.

It was also around this time Bill Doms and I ended up chatting on the phone quite a bit while we tried to figure out our attack plan.  I know that Nick and Amanda were making their way towards Ortonville to see shelter from the bow echo which was forming.  I went down by Corona to Wilmot and was greeted with some of the best Stacked Plates I've ever seen. 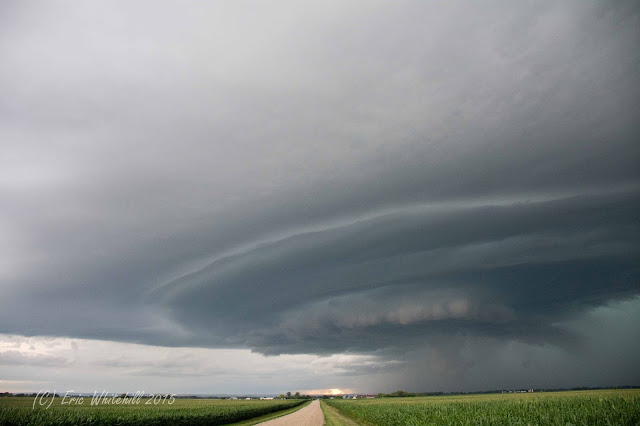 At this point, I was making my way down dirt road after dirt road.  The good news most of the really nasty dirt roads (including some minimum maintenance!) were still in decent shape as they hadn't been hit by the rain and hail yet.

I kept making my way south and east, but at some point I would have to face the beast and let it overtake me so I could make the final long journey home.  I knew there was no way I would make it to the family reunion tonight.

I made a few phone calls and after talking to some friends and Hutch back at the station, I ended up finding out about a car wash in Madison, MN.  This is where Bill and I would meet up, get some gas, and then ride out the storm.

Bill and I ended up riding out the storm, and just before the storm hit, it looked like this:

We expected to get hit with 70+ mph winds, so we set up our cameras and proceeded to watch the town of Madison get hit by the storm.  We saw the town lose power fairly quickly, but it seemed like the worst of it went just south of the town.

Bill and I were both able to escape the storm with no damage, aside from a bent Ham Radio antenna, and said our good-byes and started to make our way home - him to Minnesota, myself to Fargo. We were able to chat on the phone for the first hour or two, which is always a welcomed thing.  You know you have a good chase partner and friend if you have someone willing to gab with you about almost anything to help decompress after a chase and to help keep you company on the often times long drive home.

I ended up getting home right around 1am, after a stop at McDonalds for yet another Minion toy.  (Did you know I have an unhealthy obsession with Minions?)

I have a few pano pics which didn't make it into the full set from earlier. Here they are in no particular order:

Overall, a very awesome chase, and a great way to end a day.

I made it out to the family reunion on Saturday morning and ended up out in my boat for a good portion of the day.  Good times with family, some fish in the fry pan, all said - a pretty good weekend.  And really, isn't that what this is all about?  That said, don't skip out on your family reunions.  Yes, we all have the crazy Aunt/Uncle...but you know what?  You're still going to miss them when they're gone.  Find out about their lives growing up.  You might be surprised about what you find out!