Seems like many of our chase days so far this year have been on Fridays.  This is kind of a two-edged sword.  On one hand I'm glad because it's a Friday and if I get stuck somewhere then I don't need to worry about getting sleep and getting up in the morning.  On the other hand, it delays me starting my weekend and spending much needed time with my family.

But, this chase was over with fairly early, which made it all the better!  Now, one thing I will note is this graphic below:

However, earlier in the day we knew there was a chance for some severe storms in our area because there was a low level boundary along with the upper level low forming as well.  Combine that with low freezing levels, there was a chance we might see some hail reports and _maybe_ a tornado or two.

We started off watching some storms just south of the F/M Metro.  Our promotions director (who recently won an award for her work, so everyone say CONGRATULATIONS WENDY!) also met me out there to shoot some b-roll for some promo work tagged along in a separate vehicle as well.

We started off watching this cell near Colfax try to go up.  We could see the back of the towers and it was looking pretty crisp and clean, and with another cell off to my west, this was a good place to watch both cells at the same time.  No reason to run around the countryside when I could just park on a dirt road watching storms.

We kept watching these storms for a while.  We knew the chance of anything happening was low, but we wanted to watch anyways.

Here's some timelapse footage from the one of the cells as it passed over us.

Wendy and I kept watching these storms for a little while and then they started to fall apart quite rapidly.
I crack myself up. :)

With these storms starting to fall apart I started to pay very close attention to the cells that were starting to move out of Grand Forks County.  Wendy ended up heading home and I made my way north.

I'm glad I did.  What I found did not disappoint!

Just amazing structure with this storm!  I was on the phone with Hutch back at the station very quickly letting him know what was going on.

The structure of this storm very much reminded me of the Leonard, ND storm from August 2006.  The striations in this storm, the inflow feeding into it, and then the wall cloud associated with this.  I was just hoping it would hold off on producing anything until it got away from Arthur and Hunter. 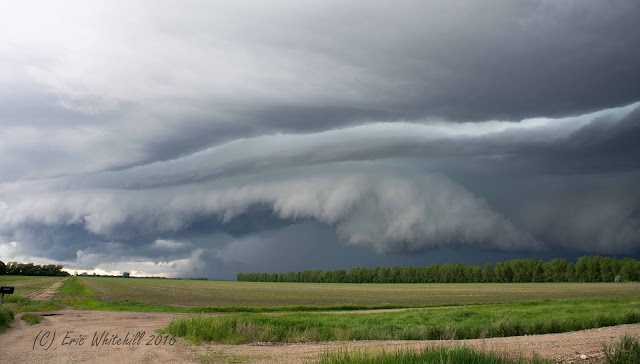 Yep, this storm was definitely taking on that supercell shape to it.
The good news for me is that the storm was moving fairly slowly off to the east-southeast, which made it easy to keep up with.

For a little while it looked like it was gusting out, but it very quickly wrapped up into a very nice wall cloud.

It was around this point that I called the NWS after putting Hutch on hold back at the station.  (Sorry boss!) I was able to talk with one of their forecasters, Jennifer, and her and I had a very long conversation over what I was seeing visually and what she was seeing back at the office in Grand Forks from the 88D and the near storm environment maps.

This wall went through several cycles.  The part which was concerning to me is that this wall cloud was spinning and it was fairly low to the ground.  That's never a good sign when you do not want a tornado to develop.

Here's some of the video that I shot of the storm.  Every once in a while you can hear me typing and talking to either Hutch or the NWS on the phone.

It was a very good and photogenic storm.  It's been hard to find these this year - most of the storms have been large rain producers which makes it much more difficult for us to find structure.  It also makes it much more harder to safely see what is going on inside the storm from a spotting/chasing perspective.  This really has been the most picturesque storm of the season so far!

I've heard some chasers from around here say this year so far is a 'bust'.  Yes, we have not had the June 17th, 2010 or the other major outbreaks like June 27, 2015 days.  But, I'm OK with that.  This so far has been a very productive year and the good news, no loss of life and no major crop or flood damage.  Yes, it's still a little dry, but that's improving and the lake levels are finally starting to rise.

The next week looks fairly quiet with some chases for showers and thunderstorms later in the week, but no major severe weather outbreak look to be on the horizon.  Thus, I'm looking forward to hopefully spending my time with my friends and family over the 4th, getting my fishing line wet, catching a few walleyes and having shore lunch while we watch fireworks.  Even with all the bad things happening in the world, it's still a pretty good place where we can enjoy many freedoms, especially here in America, where in many other parts of the world people do not have.

I still have a few more blogs to get through of the smaller events we had (Including the Moorhead day with Krista Boehm!) but I wanted to get some of the more pic-heavy blogs out of the way first.

Whatever your plans are for the 4th, make it a safe and happy one.

Now, back to my cold medicine!  (I blame any typos on Nyquill!)