A pretty warm day yesterday led to a little bit of a chase yesterday evening.

Left Fargo in the late afternoon and headed west towards some cells near Bismarck.  While I was on my way out west, it became apparent to me a couple of things:
1)  No way was I going to catch those cells out on the cold front south of Bismarck.
2)  Road construction on I-94 between Valley City and Tower City could REALLY screw me if things went poorly.

A few people might ask why did I not chase or go after the stuff in Nelson and Griggs counties?
1) It was north of the Warm Front.
2) Energy was not as great to the north.
3) I did not believe those storms were surface-based.  I.E. little chance for a tornado.  Hail, yes.  Wind, yes. Tornado?  Not so much.

So, knowing that, and knowing my late start left me out of the running for the storms near Bismarck, I drove up on the cell near Jamestown.  As I got closer, this is what I was greeted with.

This made me kind of giddy.

I kept following this storm for a while.  It was a fairly slow mover.

A little further to the east, it became tornado warned.  It at times started to do lots of spinny stuff, but this is just a neat little thing I saw near the I-94 Spiritwood exit.


Shortly thereafter it started to gust out.  Lots of cool looking things under the shelf. 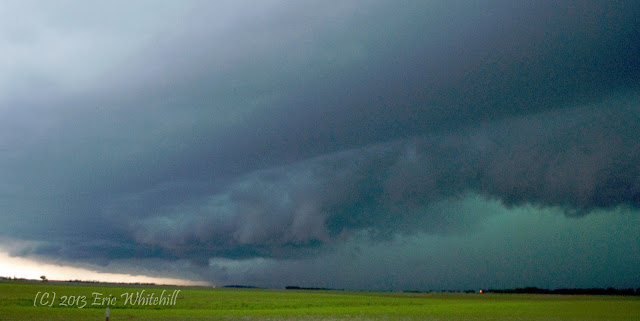 Right around in here is also where I did a couple of phone updates with Hutch and the rest of the gang down at VNL.


I did happen to have an opportunity to catch up with some old chaser pals David and Kristen Drufke.  Pretty neat seeing some Minnesota chasers up here in ND.  So, while they weren't looking, I caught this little gem.


After we also took a couple of other shots, we went our separate ways and I kept following this storm closer and closer to Fargo.

While I was meeting up there with Dave and Kristen my favorite shots of the year popped up.  I love both of these shots.

I also can't go far without my attempt at lightning. (Video grab from the camera)

My overall favorite shot though came from this:

Just a wonderful night for chasing, and hopefully people found the information all of us got to you as informative.  For those of you watching from home my live video cam, I apologize for the choppiness.  Being out where I was my video link back to the station was not playing very nice.  I think I've corrected it though for the future, or at least I hope!

All in all, it was a good night for chasing.  It doesn't sound like anyone was hurt last night by the storms, which is a good thing.

Footage I shot last night is still uploading, so I'll toss that up once it finishes.  (Edit: it will be available at http://youtu.be/dzwMGkHMl4Q in about 20 minutes)  In the meantime, here's a new totally awesome promo our promotions department at the station put together last night and today.

Also, thank you all so much for the number of friend requests on Facebook and adds on Twitter over the last two days!  Hopefully you find my tales of chasing as neat and exciting as I do!