I have no idea or other way to describe what happened yesterday.  There are days which you just remember when chasing, and yesterday is going to rest right up there with Greensburg.....Wadena....Tyler....and Lake Crystal.  A day chasers will talk about and just say to each other "How many DID we really see on 6/27?  Did I see you on the corner of Bob's Road and 33?"

Nearly 24 hours later, I'm still trying to process it all in.  I tried to decompress last night, but I just sat in bed until 2am just looking at my photos on my camera and trying to comprehend how many tornadoes did we really see?

Yesterday was really telling when I got up and read the Area Forecast Discussion from the National Weather Service office in Grand Forks where it said:

ISSUED AT 945 AM CDT SAT JUN 27 2015
THE MAIN CHALLENGE WILL BE SEVERE WEATHER THIS AFTERNOON/EVENING.
THINGS ARE LOOKING FAIRLY PRIMED FOR A FAIRLY WIDESPREAD SEVERE
EVENT STARTING BY 2 PM IN THE NORTH THEN SPREADING SOUTH AND EAST.
THE NAM IS PROGGING CAPES AROUND 3000 J/KG AND THERE WILL BE
PLENTY OF DEEP LAYERED SHEAR AND STEEP LAPSE RATES. THE LOW LEVEL
FLOW IS FAIRLY WEAK...BUT THERE ARE CURVED HODOGRAPHS SO
SUPERCELLS SHOULD BE THE INITIAL STORM MODE. THERE WILL BE
POTENTIALLY VERY LARGE HAIL...DAMAGING WINDS AND ISOLATED
TORNADOES. IF DEWPOINTS CAN POOL IN THE MID/UPPER 60S THEN THE
TORNADO THREAT WILL INCREASE. WE HAVE INCREASED POPS TO LIKELY IN
THE NORTH THIS AFTERNOON AND WILL MENTION SEVERE ALL AREAS AFTER 3
PM THROUGH 10 PM.

Little did I realize what this meant for us later on in the day.

I was able to chat with my good friend Bill Doms in the morning, and then him and I were off to northern North Dakota.

We started the day knowing far northern ND would be the place to be.  As in this is how far north we got:

Yeah, that's right.  Canada.  My cell phone and data cards were all picking up the Canadian towers.  I think the next hill to our north was indeed Canada.

And, here was the storm deciding it wanted to immigrate to the US. 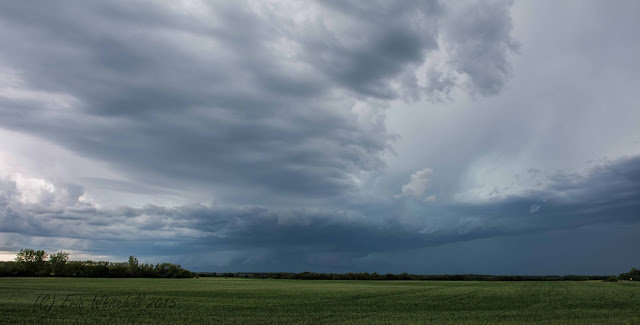 I was also so close to the border I could hear the Tornado Warnings being issued by Environment Canada.  Believe it or not, this was actually the first Tornado Warning I ever heard issues by EC.  They would read off the warning in English, then read it off in French.  Always a treat.  It also helps that I have probably one of the best radio antennas ever made!

While Bill and I were on our way north, we were able to meet up with Nick Elms and Amanda Hill, which is always a pleasure.  Bill, Nick, Amanda and I often end up on the same storms together....and for some reason often times find ourselves on the same roads.  :)


During this time while we were sitting near Walhalla, the export from Canada started to get closer. 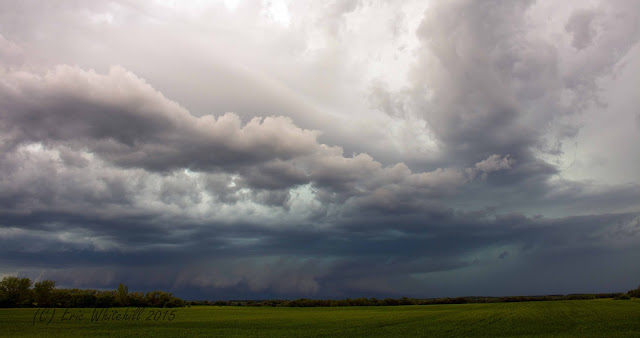 We started to see a very nice base on this storm with the inflow jet screaming in from the east.

Now, because I was so close to the Canadian border, my cell phone kept switching to Canadian towers and I kept trying to call the NWS office in Grand Forks to let them know what is going on.  I'm sure I'll have a surprise phone call or two from Canada on my next bill.

Finally we started to see this mean beast getting closer and we could see the green hail core up inside.  We knew this was no place we wanted to be, so we started to go south as quick and as fast as we could.

Not far from Onsabrock we had our first touchdown.  It was at this point everything really started to get hairy and scary.

We basically went wall to wall with coverage at the station.  From what my cell phone has told me is that I was on with the station for over 4 hours straight giving reports, taking photos as I could.

At this point things started to blur a little.  I know with the station we were talking about what we are going to do next, and the decision was made - we're going live.  I have to admit, I did get a little pit in my stomach when I heard I think it was Lisa say that to me in my ear.

This next tornado here should be close to Adams/Lankin according to my GPS.

I think this was the tornado where I told Lisa and Hutch where I could see the debris getting tossed fairly high into the air.

At one point, I looked off to my left and saw two tornadoes, and then I looked down to my south towards Hope, and I could see yet a THIRD tornado.  I was moving too fast and had too many other things to worry about to take a photo of it, but just an amazing day.

At one point, I got so busy I just stopped counting the number of tornadoes I had seen.  I had other things I needed to worry about than some tube count from today.

Around this time I was able to meet back up with Nick and Amanda after we got separated earlier, a decision which left me battling with the RFD and a phone call to Hutch for some last minute Nowcasting. 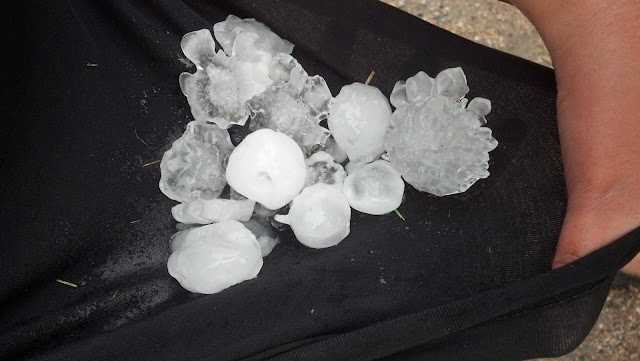 We also ended up seeing the Larimore tornado from a distance.

During this time, lots of phone ins to Lisa and Hutch and the station, and my phone was blowing up with my friends and family wanting to know what was going on, if I was ok, what I was seeing, etc.  I was also posting photos to twitter as I could, and my phone was just a vibrating, ringing mess. 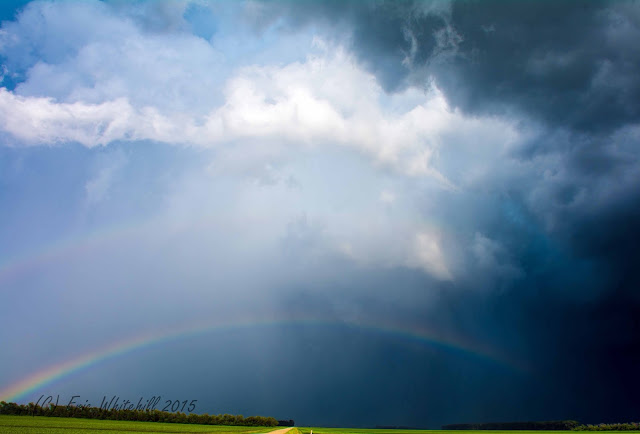 Finally, just south of Mayville, the storm started to fall apart.
At this point I ran back to the station, uploaded some video for the station and for the National networks, and then went back to chasing since we still had active tornado warnings in our viewing area.

Now, one thing I saw today was there were more and more chasers out.  Normally this isn't an issue if everyone is smart.

Unfortunately, I ran into people asking me for radar updates, asking if I had radar, where the tornado was behind them as they grabbed their cell phones or selfie sticks to try to take a photo of themselves in front of the storm.  This is not a smart or wise move.  Please, do not park your car in the middle of the road, take selfies, and try to chase storms without knowing what you are doing.  Tornadoes can kill you.  Hail can knock out or destroy your windshield, and there's a good chance your insurance agent will not like your explanation.  You can get blown off the road by RFD, and then someone has to come and rescue you.  Please leave the storm chasing to the professionals.  An iPhone app and a camera does not make a storm chaser.

Overall though, what a day.  Just incredible.  I never imagined we would be on the air for over 4 hours straight giving storm updates and chasing.  I don't think I know exactly how many tornadoes I saw today.  I just know I have a number of steak dinners coming up after today!

I also can't count how lucky I am to work at such a great station like Valley News Live with the awesome team we have.  I never in my wildest dreams thought I'd be able to live out my dream of being a weather guy/storm chaser on TV and be one of the few actual 'paid professional' storm chasers in the country.  I know I can't thank our GM Jim Wareham, our News Director, Ike Walker, and everyone at VNL for all their support in being able to do what I love.  I know there were some rough parts today, but those will only get better.  I know I am going to go back and watch my dash cam video, watch our cut ins we were doing, and see what we can do better.  If you are not learning and evolving, you are falling behind.  Technology will change, experience comes into play, and sometimes, just luck.  I know our awesome work at the station could not happen without some unsung heroes - the people issuing the warnings at the National Weather Service Office in Grand Forks, and the people you don't see working behind the scenes.  It's all one big chaotic chorus at times, but we all work together, and we get it done.

Today, I ran into a viewer out in Ottertail County, and at first they didn't recognize me.  Then, they saw my truck and recognized my face and voice and said "I just saw you on TV last night!  You're the only station we watch!"  They went on to say they were glued to the TV watching our coverage, and that they think we (Hutch, Robert, Lisa, Mick and I) are the best, and that they felt we saved people's lives yesterday.

To close, I was asked for some stats regarding yesterday's chase.  I know I posted some on my Facebook page early this morning, but there are with some additional ones:

- 4+ hours doing live cut ins and on the air
- At least two phone calls using Canadian cell towers.  (Cell bill might sting a little next month!)
- Over 200 (updated as of this evening) mentions/retweets on just my tweets alone.
- At least 51 new followers on Twitter.
- Over 20 new friends on Facebook
- Three high capacity camera batteries used/drained.
- Two 64 GB SD cards worth of pictures and video, (close to 10 hours of video between dash cam and other cameras)
- Over 250 pictures reviewed and edited.  I selected the best ones here today.
- Over 475 (Updated this morning when I checked my odometer) miles chasing.
- Average MPG was 16.6 in the storm team vehicle.
- Almost 3GB worth of Internet data and video utilized and broadcast just from my vehicle alone.