As I sit here this Sunday afternoon after tending to my garden, doing some yard work, and starting to clean out the chase vehicle after a very busy week, I looked at radar and ventured down south.  While up here in the Red River Valley we are currently dealing with too much water, down south, many of my Oklahoma and Texas friends are dealing with some very long term, very damaging drought.  Up here, we have more than enough.  Down in Pawnee, OK, they are so close to running out of water, the city is having to drill emergency wells in order to supplement their water supply.  In Minneapolis, there are road closures, people sandbagging, and even 35W is getting an emergency dike put up due to the rising waters.  Just interesting how weather works.

Now, back to the reason everyone came....pictures!

On Friday, I was sitting in my office at the day job, and chatting with a coworker in Texas.  Next thing I know, I get an alert popping up on my phone saying this:


And I quickly look at radar and go "Hrm...this could be interesting."  Not long thereafter, I get a message from my manager asking when my live video feed would be up.  I ask her then "Is this permission to leave a little early today?"  I love my dayjob.

Right away, I get a text message from Robert Hahn at the station wondering what my plans were.  Since he worked the early shift for Mick since he's on vacation, I ask him if I should pick him up.   Within 10 minutes, we were loaded up, and ready to go!

As we started to approach the storm, we would already see the wall cloud with lots of action underneath it.  We just wanted to get to an area where we might be able to get a view of the bottom of the cloud.


Lots of scud action and upwards rising motion into this storm.

Once we were able to get off the Interstate and started working some country roads, my knowledge of lakes country was going to be put to the test.

Now that we were on roads where we could stop, look, and film, it was time to enjoy the fact we were on a tornado-warned storm.


What was clear to us is that this storm meant business.  It was in an environment where it could produce a tornado at any given time.  We were lucky enough to have some pretty good cell coverage in the areas we were in so we could bring what we were seeing back to the station.  It was also pretty awesome to have Robert with me to help with things like navigation, radar, and adjusting the streaming camera. 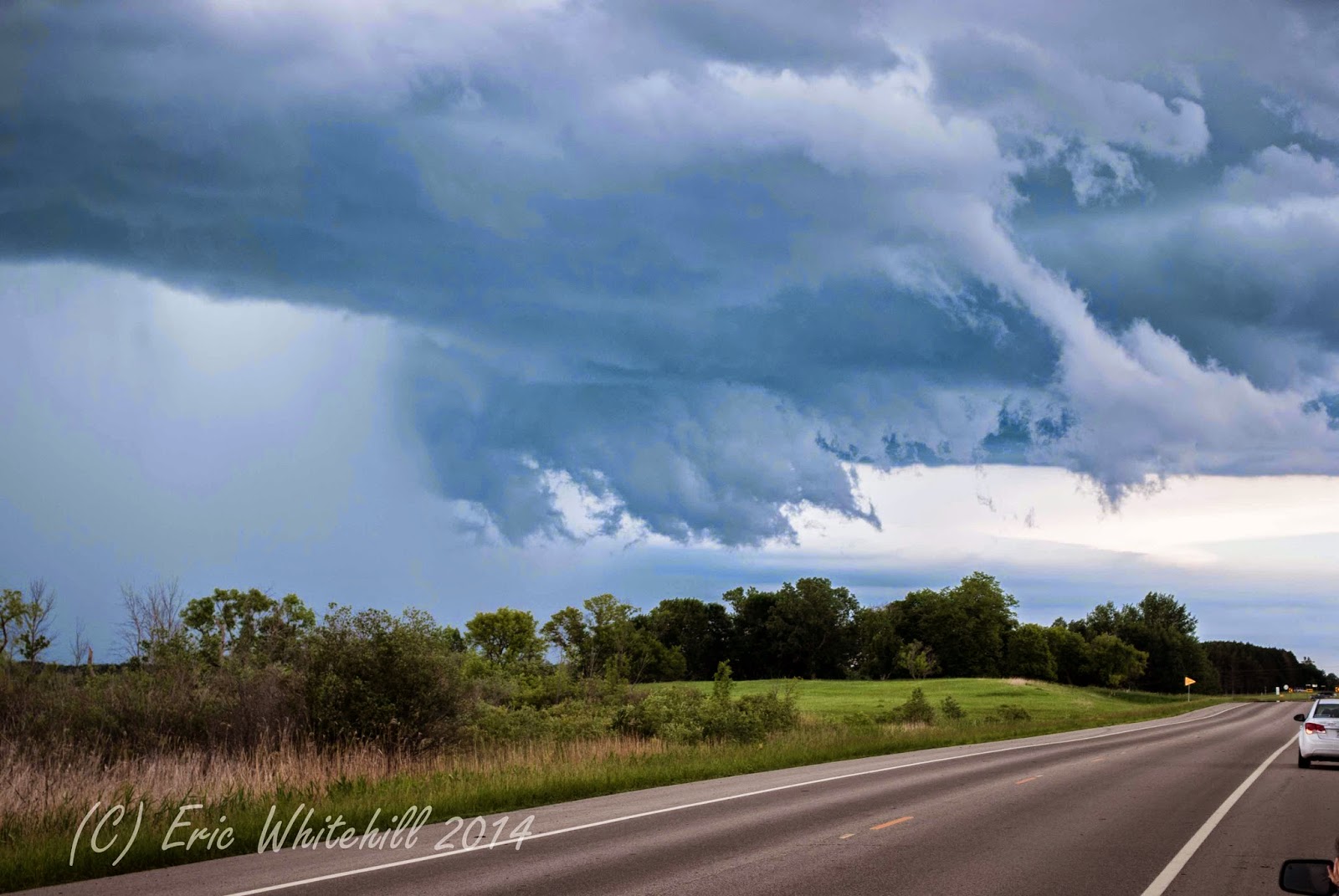 This photo was taken right after it produced a very pronounced funnel over Ottertail lake.  As soon as we saw it produce this funnel, we called into the station and got right on the air.  I was nervous for all my friends out there on Ottertail, and especially my favorite eatery on Ottertail lake.  But more on that later. 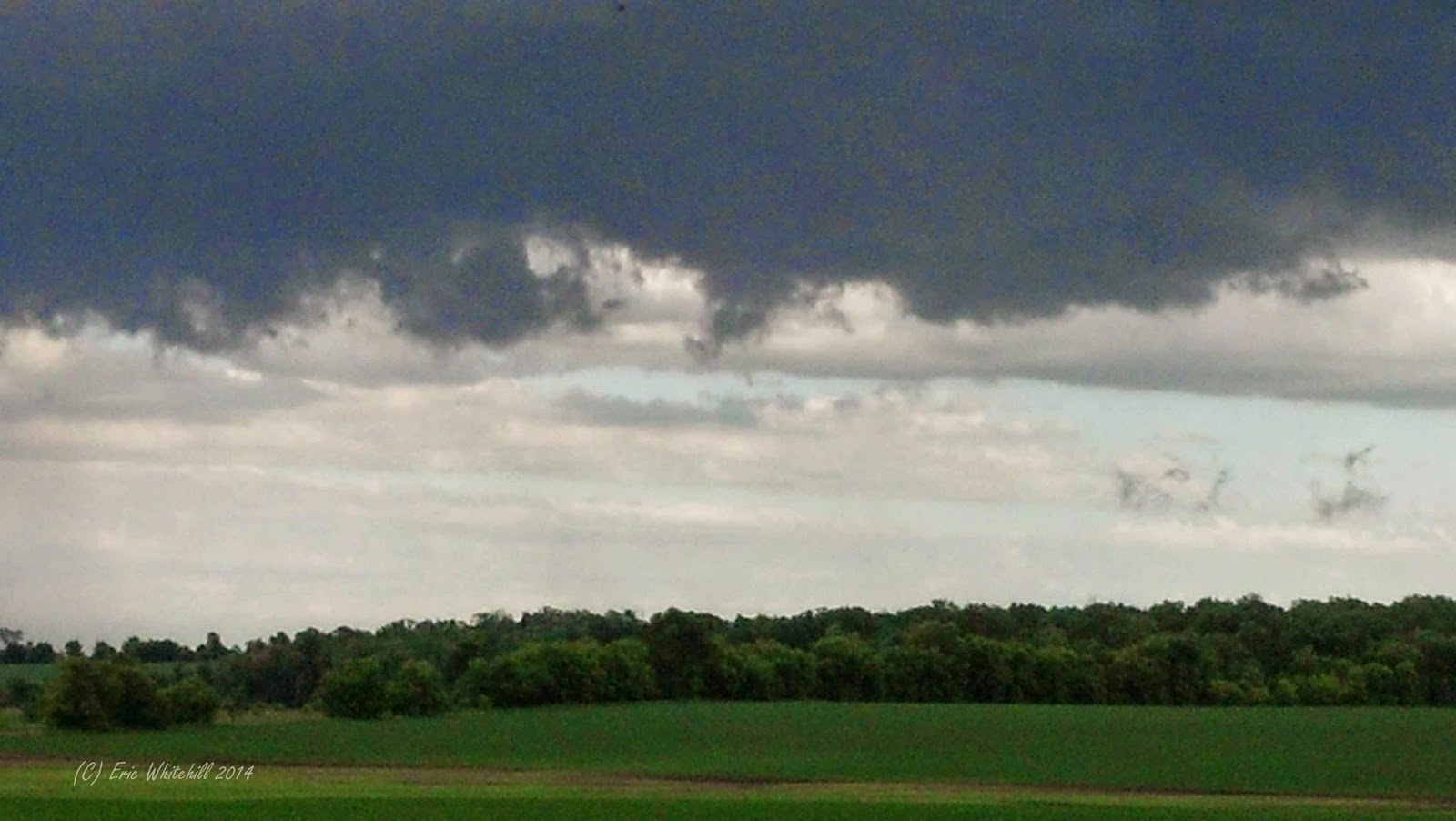 When this storm passed over Ottertail, we noticed the storm really started to fall apart.  Both Robert and I wondered if there was some interaction with Ottertail lake which helped the storm lose some of it's punch while it passed over the cold waters.  Might just be a coincidence, but it was fascinating to say the least.

After this point we got closer to Deer Creek, and took a few shots: 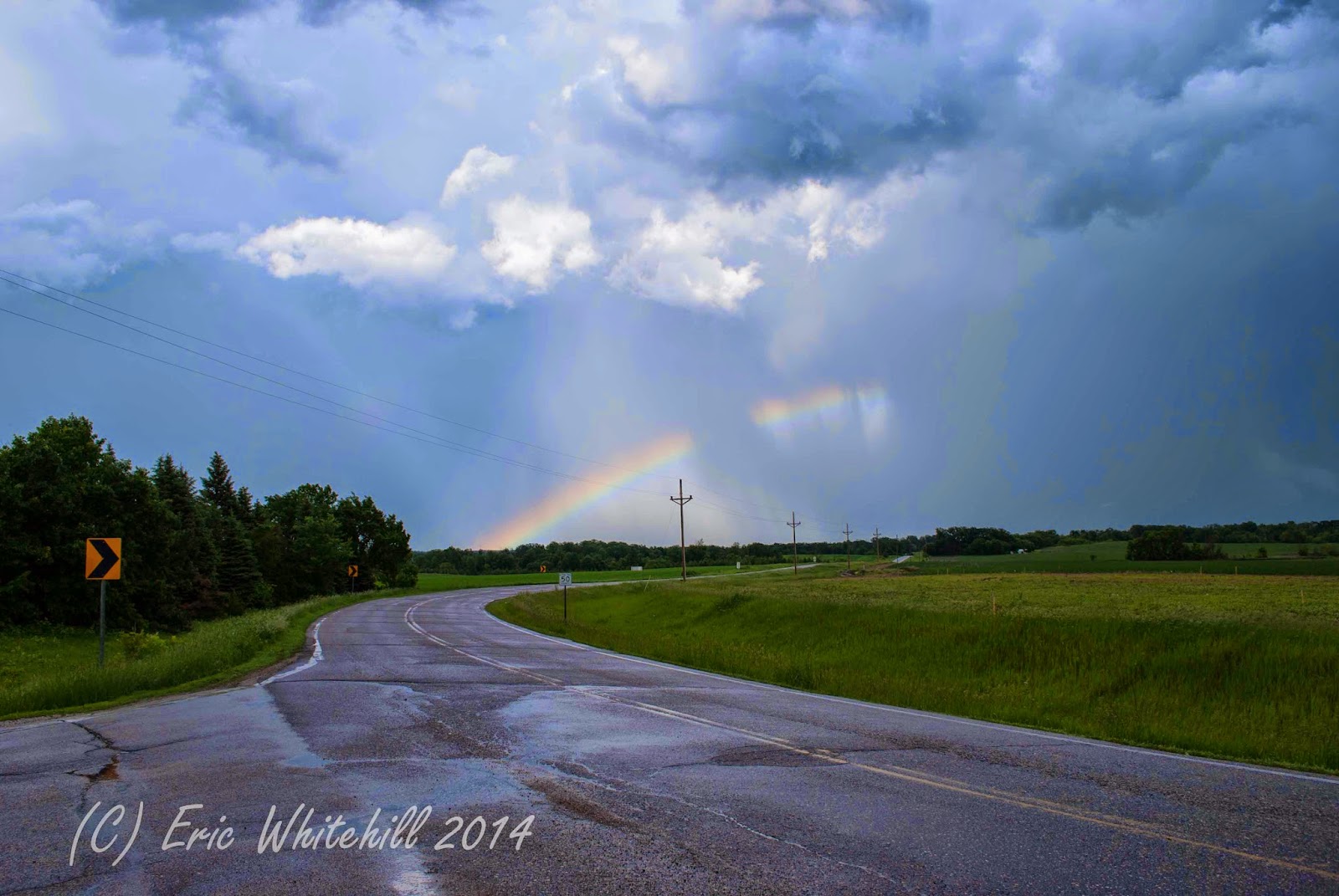 Once we made our way into Deer Creek, and the edge of our viewing area, we noticed there was a TON of hail still on the ground. 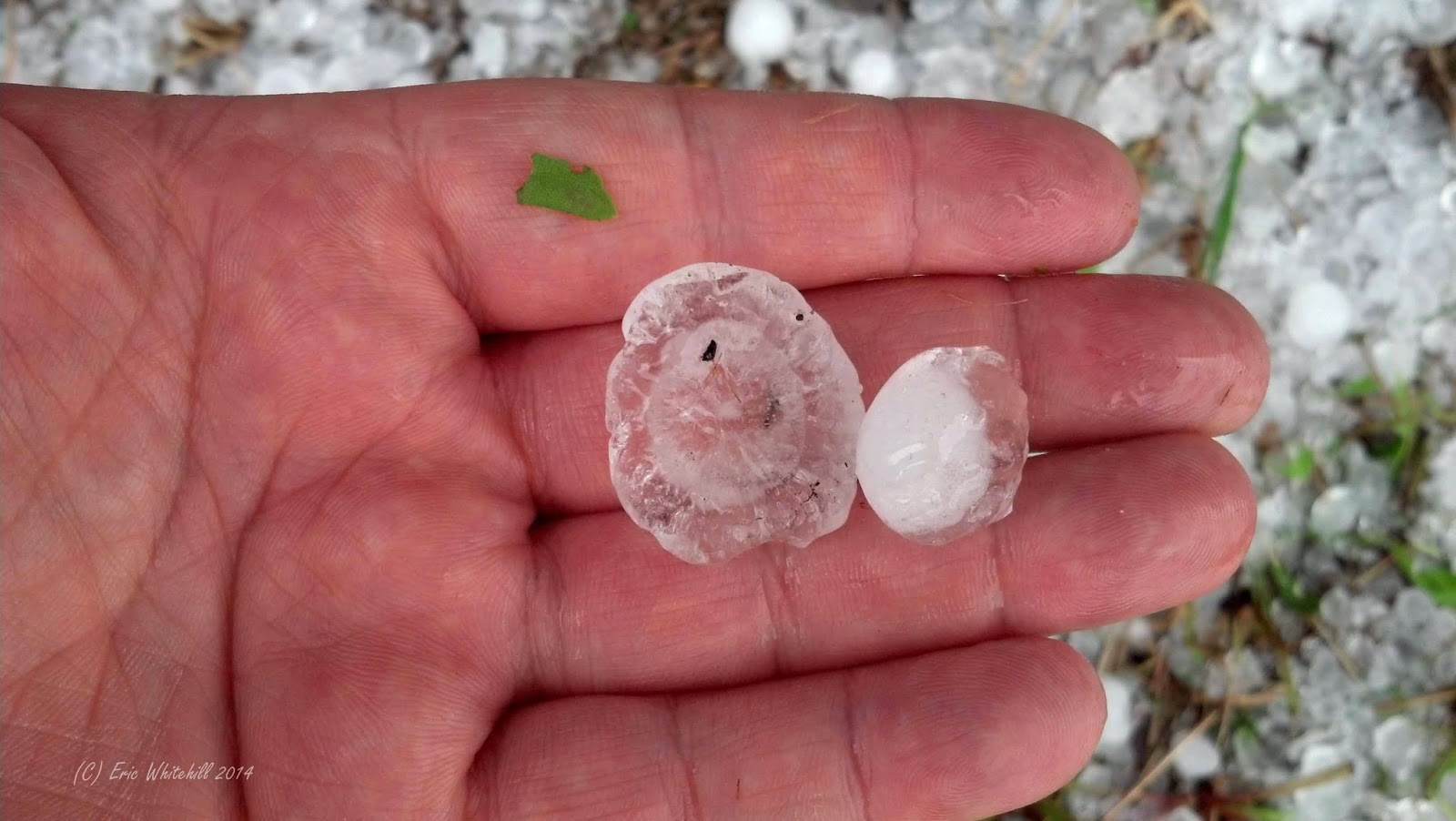 Most of this hail had been sitting there for a little while and it was still over an inch in diameter.  We did see lots of leaves down in the city of Deer Creek, but thank goodness no major damage.

On our way out of town and back to Ottertail, we could see the culverts were just overflowing with water. 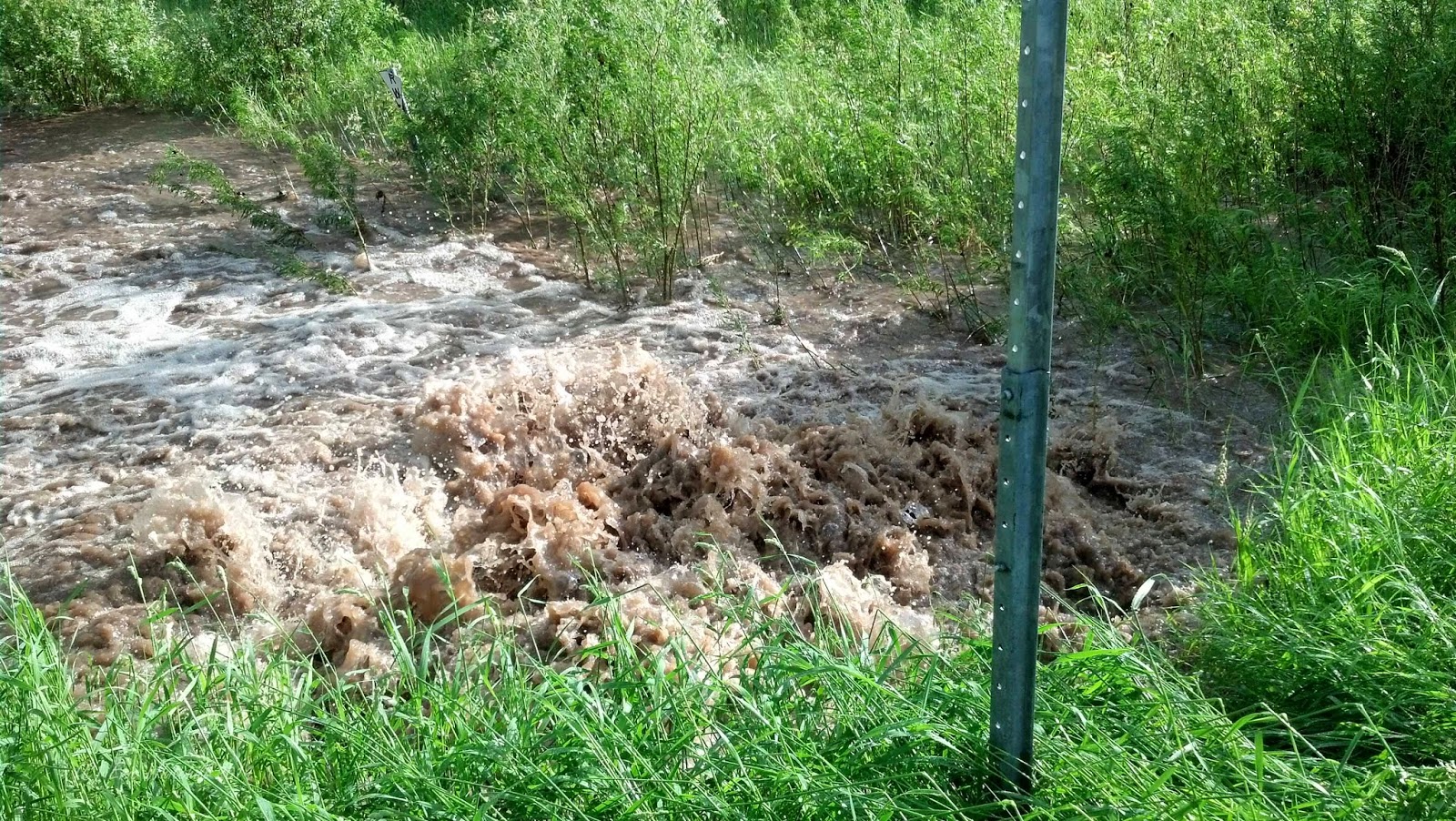 And, we even saw a 'multi-vortex tornado'!.  And I use that term loosely. 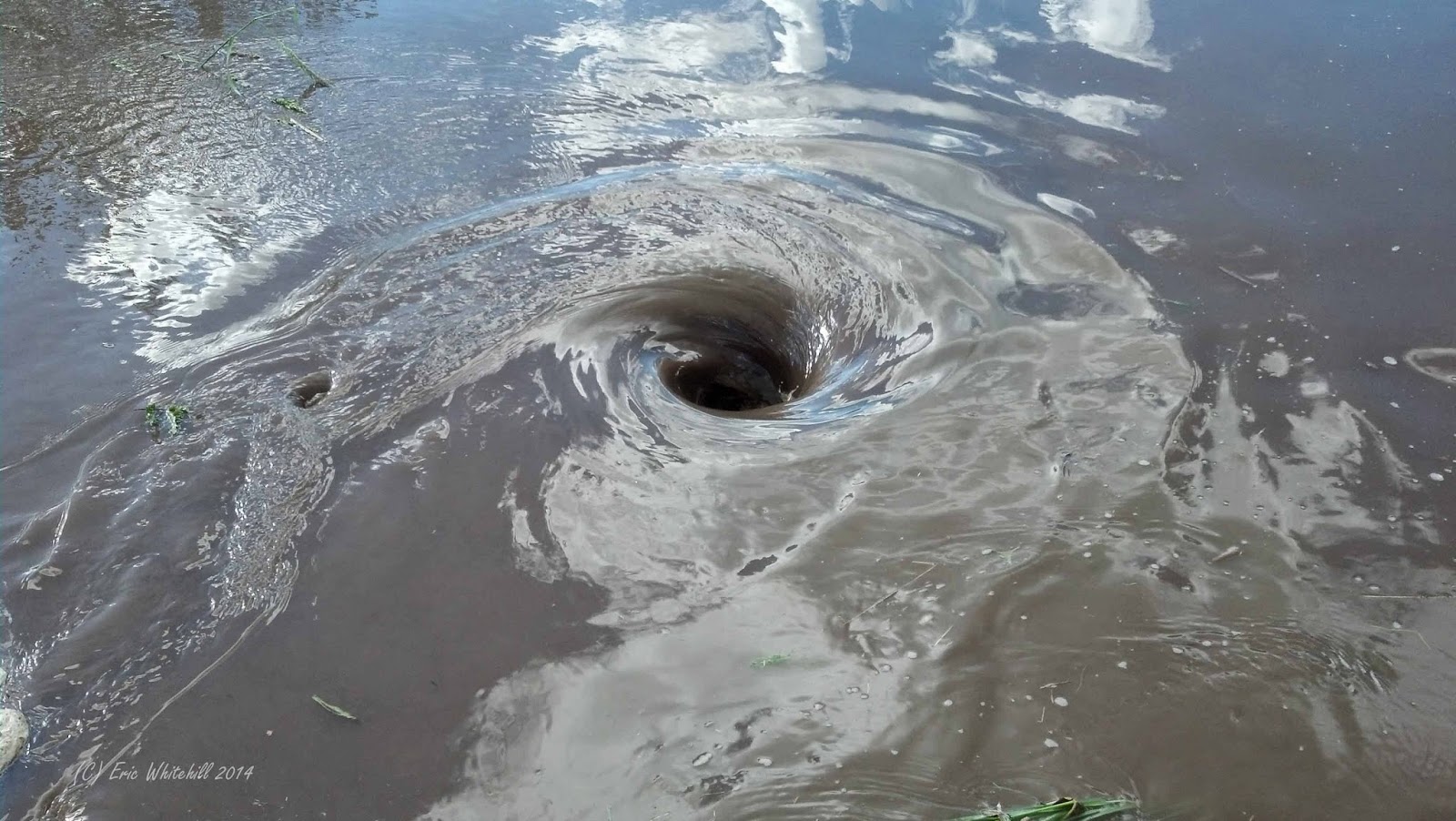 We then started the long way back to Fargo.  But, since we were so close to Zorbaz on Ottertail Lake, Robert and I did the only sensible thing.


Great food, reasonable price.  And the fishing on Ottertail Lake isn't bad either! Good news is as of 6/22/14, no confirmed tornadoes yet from the Ottertail County storm.

One of the questions I was asked over Facebook was why is it so hard to get pictures from lakes country back to the station?  Great question, and thank you for asking!  One of the biggest issues you run into in lakes country is the trees and the hills and the lakes.  All the things which make lake country great, also makes it very hard to spot or chase severe weather.  It's entirely possible for you to be under a tornado warning and not know it because of the lack of cell coverage in the area.  Both Robert and I use different providers for cell service, and even we found it hard to maintain coverage.  In my chase vehicle, I even use cell amplifiers and I was having trouble.  If you are in lakes country, I really encourage you to get a weather radio.  You never know when you might need it.  Just imaging if this storm came through on a Saturday afternoon.  Having a weather radio would be handy.  Two things to have with you if you go to lakes country - VNL StormTeam Weather App, and a weather radio!