Normally on a day like today, I'd like to sit here and at least put a general area of where we went.  But, I'd be listing stuff all day.  Over 360 miles.  1 incident of driving like I'm in England.  1 dead bird.  No, wait, that was on Friday.  Three gas stops, one gas station sandwich, one gas station rice krispy bar, and one case of a REALLY bad road choice.  As in this wasn't Bob's Road.  It was Bob's uncle's twice removed road.

This was also the day of back and forth, back and forth where at one point I think Robert and I were on the same road three times in the same day....on different storms.

First stop of the day had Robert and I heading west to Jamestown, and then we were going to hit up Dickey County, since it looked like there was a boundary sitting down there where storms may fire.  This boundary stretched all the way from near Bismarck, and then wound its way up and down the I-94 corridor, ending in Barnes County.  Yeah, it fired....about 40 miles east of Jamestown.  After we thought about it for a bit, and finally after looking at the radar scans seeing the tops on it go over 40,000 feet, it was time to accept defeat and go east.

High based, but still very pretty.


It was during this time when I got a frantic phone call.  Apparently this storm has triggering a TVS (Tornado Vortex Signature) with a debris ball signature on radar, and people were wanting to know if this storm was producing.  It wasn't even producing a wall cloud from what we could tell.  Still, some decent hail shafts. 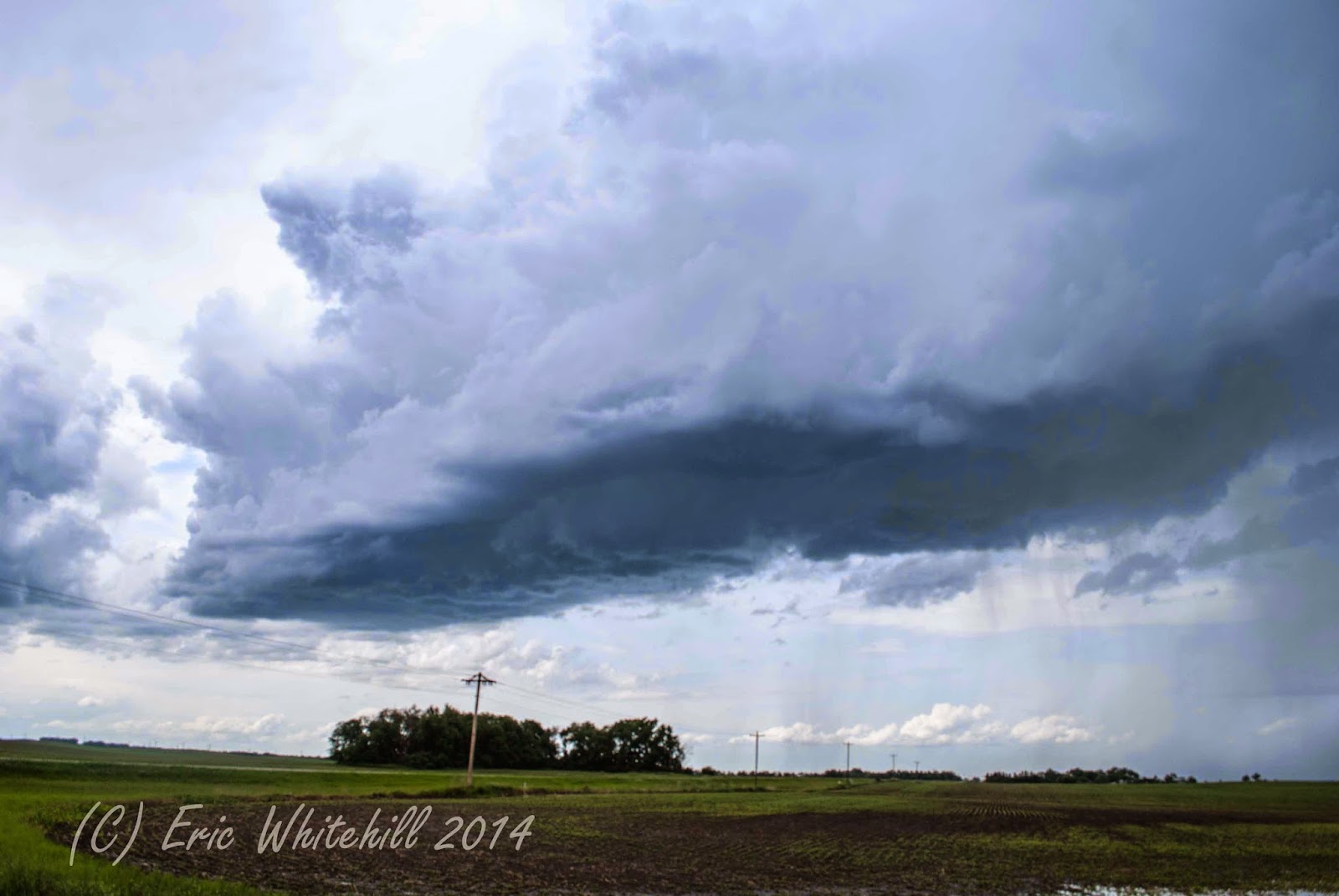 This storm kept moving closer and closer to Cass County.  This and another cell were both severe warned for hail.


Once it got into Cass County, it started to try to get a wall cloud going. 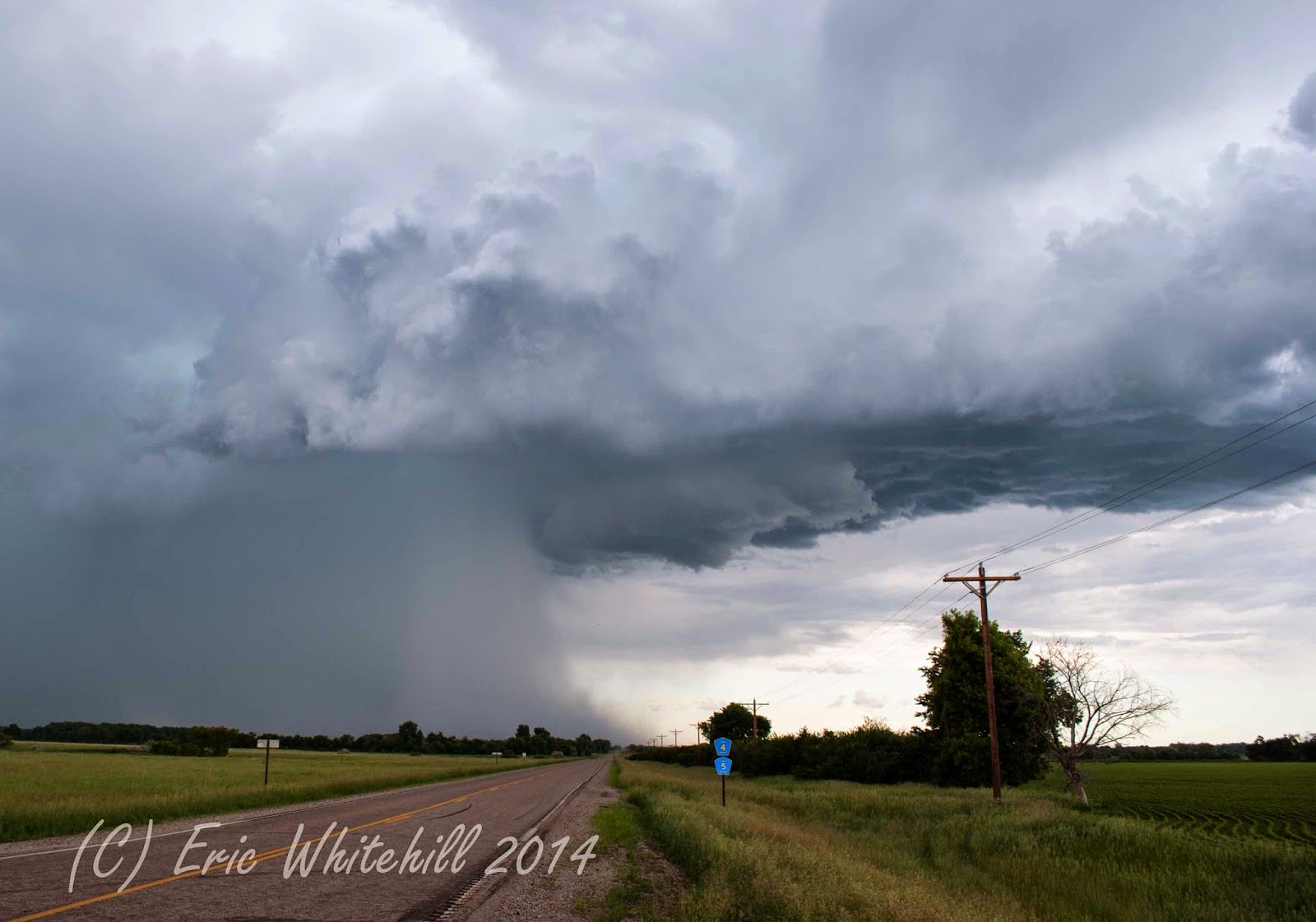 The question was - with the high cloud bases and lack of shear, would it really get it's act together as it approached Fargo? 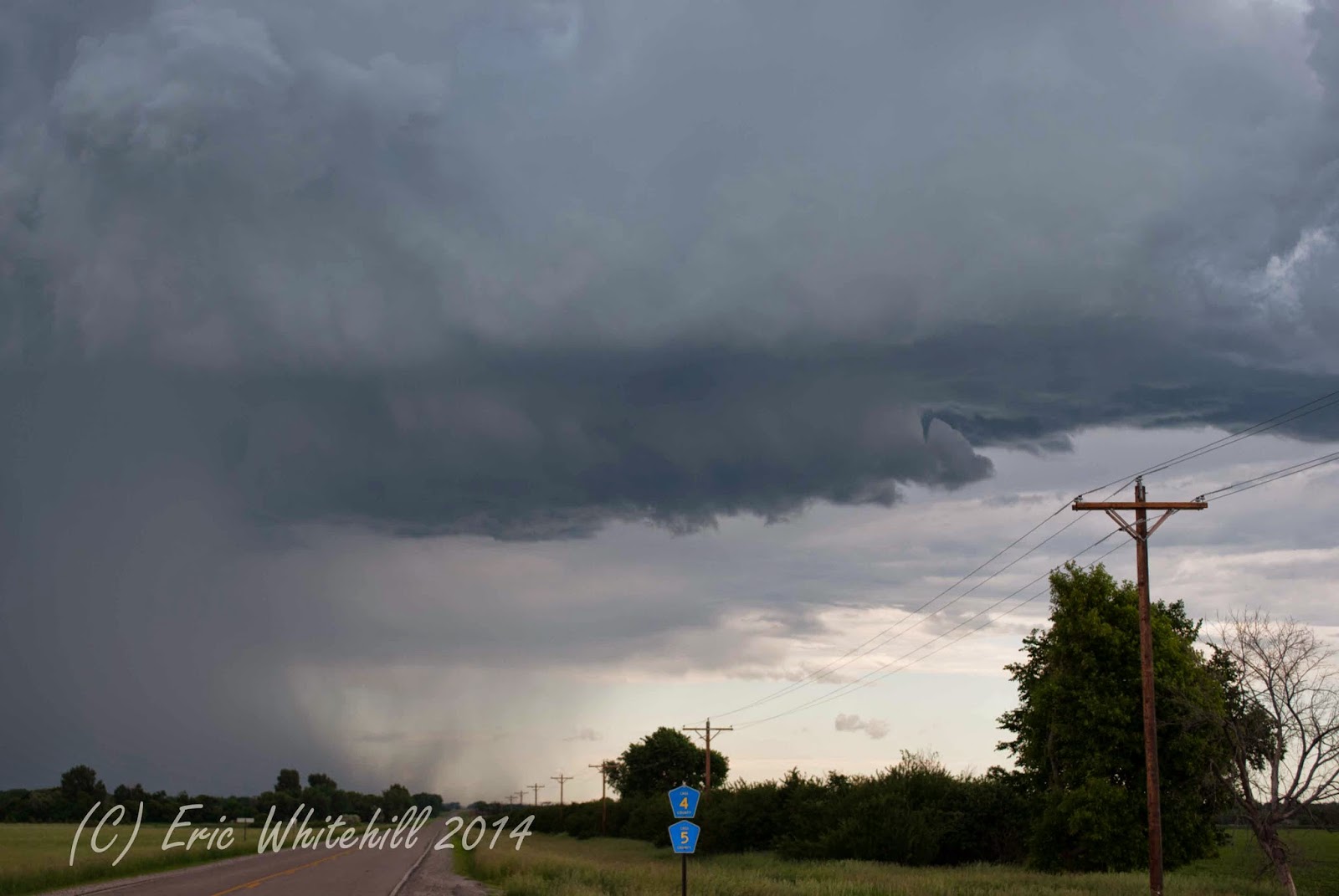 As Robert and I kept getting closer to Fargo, the storm started to lose it's characteristics and really started to fall apart.  We could at times feel the inflow getting warm, then we'd feel outflow.  Then some inflow into the storm.  Then cold outflow. 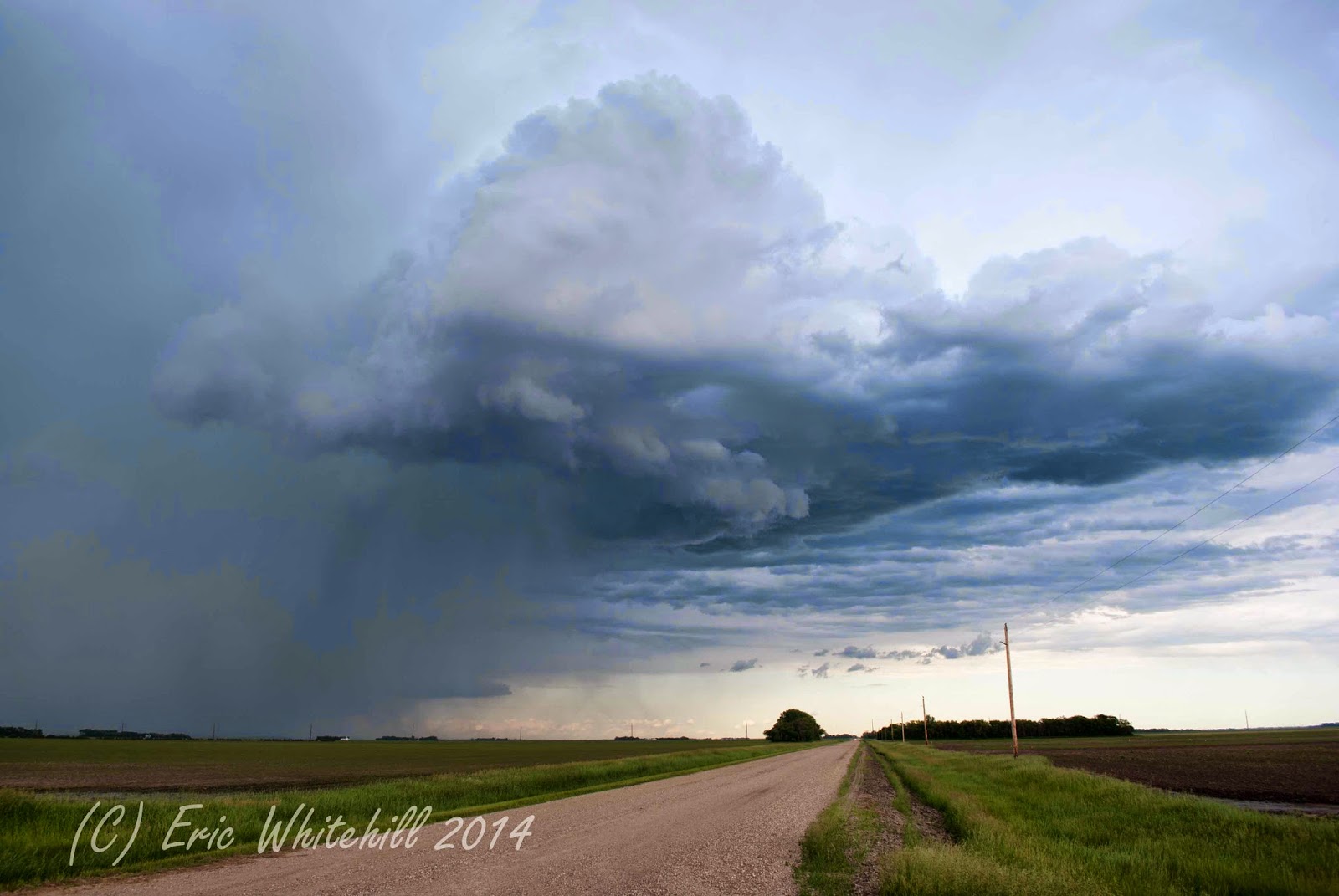 Until it finally petered out just before it got to Fargo.

After a quick stop at the station to upload some video for the 6pm, Robert and I piled back into the car, and back west we went.  We started to watch some storms as they approached Valley City in a very disorganized manner.  Nonetheless, the storms went severe warned for hail. 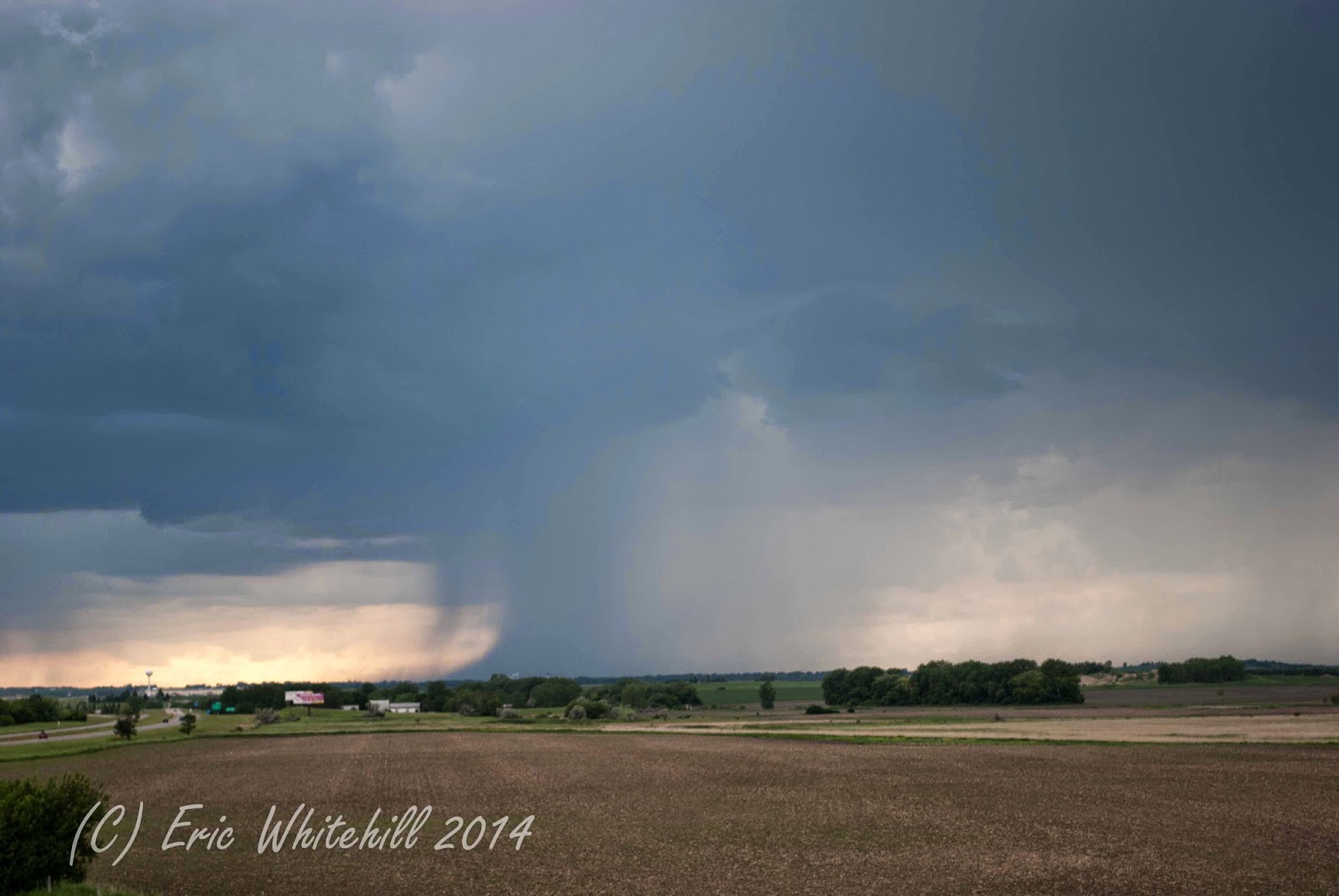 What was awesome about these storms was the almost constant rumble of thunder.  It's something I love to listen to, and it was neat to hear on this day.

Once we started getting closer to Oriska (again!) and Buffalo, it started to look a little ominous. 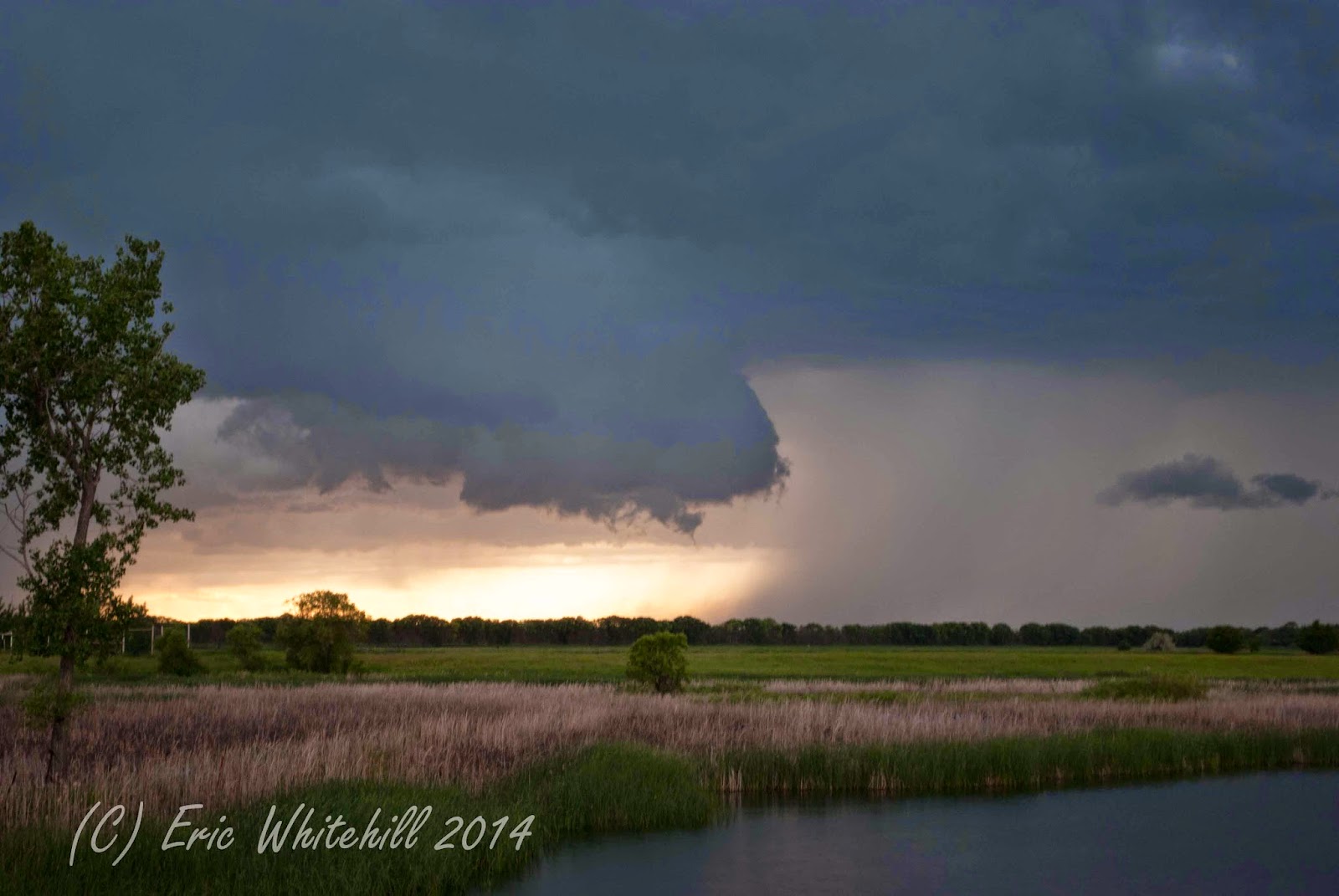 As we got closer to Casselton, we started heading north out of town. 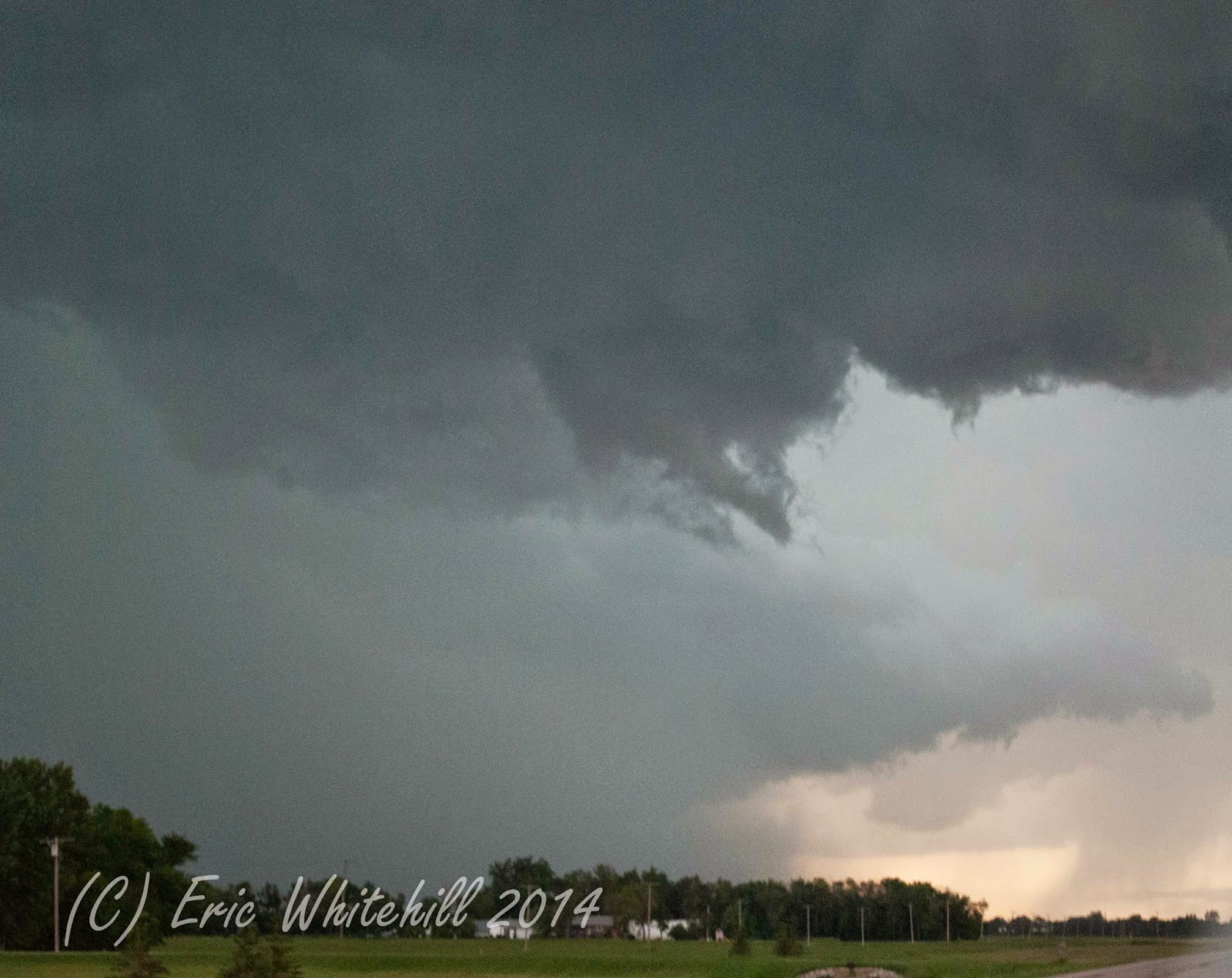 Now, before you freak out and go "OMAHA OMAHA OMAHA....HAHN PASSES.....TOUCHDOWN!"  this was along the leading edge.  So it was a shelf cloud with lots of danglies under it.  This is what you would have seen in Fargo. 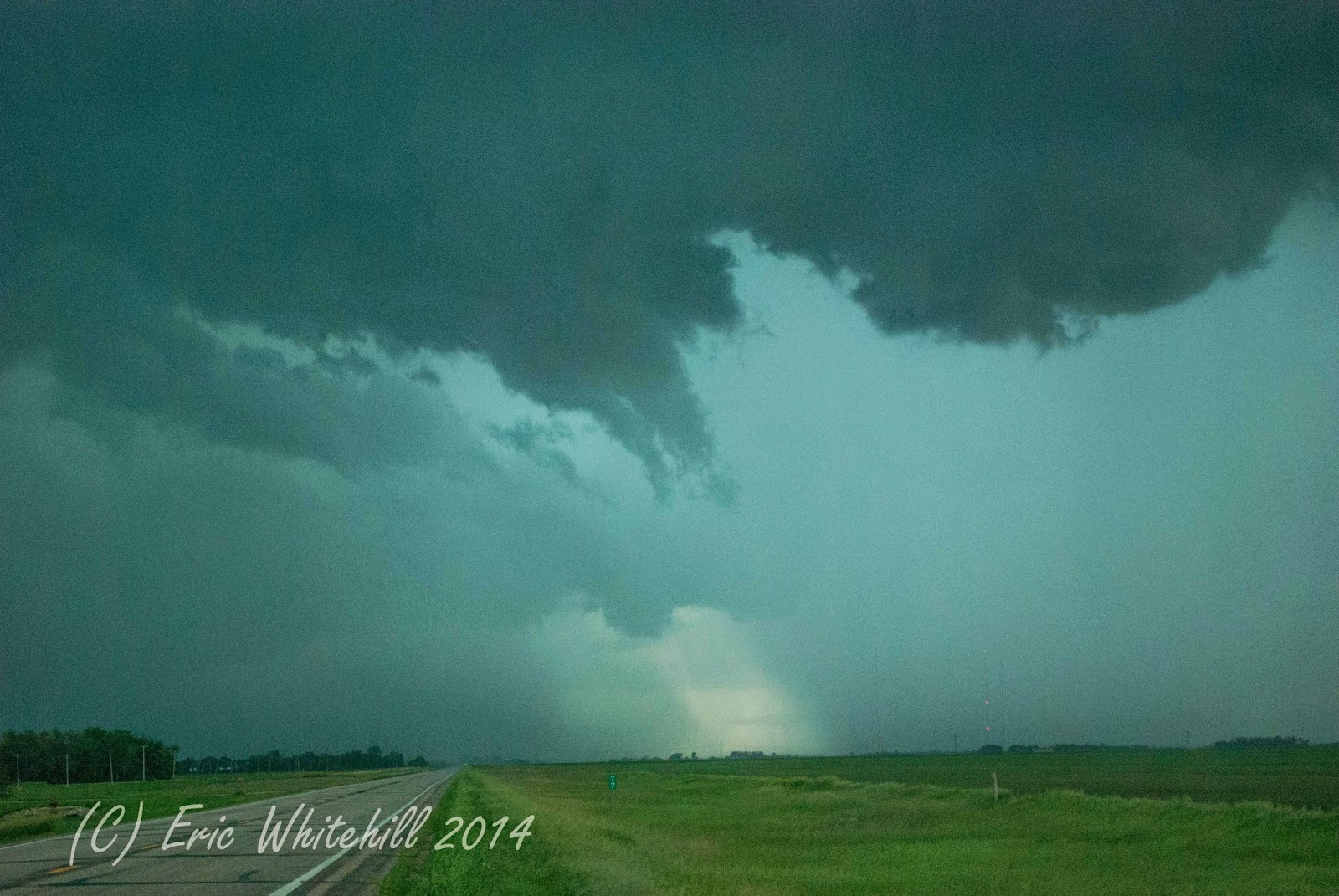 It was shortly after this time that I made a mistake.  I went down a dirt road.  Now, normally these are not an issue for me in the chase vehicle.  Good tires, 4x4, etc.  This was a mistake.

The road quickly went from being a county road to an unmarked road to a minimum maintenance road.  Bad idea. This is what we call in the chaser world as "Getting Delormed".

Now, during this time Lisa from the station calls.  I quickly hand the phone to Robert because I'm worried we're going to get stuck.  We didn't, but I'm sure it was a little intense in the truck for a while.


One last shot there of something that's really innocent, but looks pretty nasty.

Overall though, having two good chase days with a partner really helps.  I'm glad Robert was able to come with.  Now we need to look forward to this weekend.  Will the Euro pan out, or will the GFS win and bring back storms to the Midwest?  Will the drought in the southern plains get quenched?  Will I end up having to face the choice - go visit family this weekend, or go chasing?  Stay tuned!